skip to main | skip to sidebar

This is from a website about not getting stink jobs or something. See more of them at www.directyourdestiny.org

Published by The Other Boy at around 9:23 AM 40 comments:

Our class mascot is awesome. He is an elephant.
I have been making him suits out of paper. First I made him a superhero, with a cape, mask, and trunk thing. Too bad I didn't get pictures, and he got wrecked.
So, I made him another costume, but this time he has a cool pair of glasses, a cane, a feathered hat, and a floor-length fur coat.
Below are some pics: 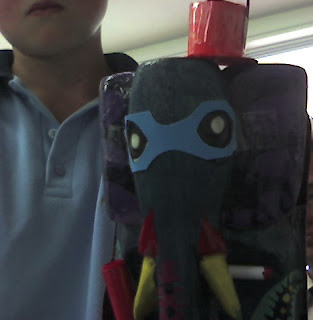 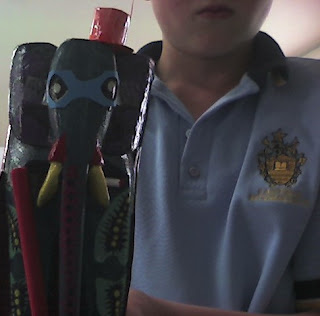 Can anyone guess what he is supposed to be?
I am not allowed to say it online, so I made a link to it:
HIS IDENTITY
Published by The Other Boy at around 2:56 PM 5 comments:

My first ever glog

Published by The Other Boy at around 4:36 PM 2 comments:

Try to watch this withour laughing or grinning - seriously

Published by The Other Boy at around 11:52 AM No comments:

Seriously, these are some really bad jokes. Dunno why I'm even posting them, other than to say I did. At any rate, these are pretty much the worst jokes I could find. Enjoy! .... or maybe not.
Two fish were in a tank. One said to the other, "Do you know how to drive this thing?"
Did I ever tell you the story about the broken pencil? It had no point.
I was reading a book about adhesive the other day. I just couldn't put it down.
Q: What's the friendliest school?
A: Hi school.
Q: What's black, white, black, white, and green?
A: Two skunks fighting over a pickle.
Q: What do you give a dog with a fever?
A: Mustard. (It's good for hot dogs.)
Q: What do you call a bass vocalist who sings by himself?
A: So-low.
Q: Where do books eat dinner?
A: At the table of contents.
Q: Why were the suspenders arrested?
A: For holding up a pair of pants.
Q: What do you get if you cross a cow with a camel?
A: A lumpy milkshake.
Q; What did the angry inflatable teacher say to the irresponsible inflatable child in the inflatable school?
A: Not only have you let me down, you've let yourself down, and you've let the whole school down!
Q: Why was the broom late?
A: Because he overswept.
Funnyandjokes.com

Published by The Other Boy at around 11:34 AM No comments:

23 of the worst jokes you'll ever hear

23 of the worst jokes you'll ever hear

3. A guy walks into the psychiatrist wearing only Clingfilm for shorts.
The shrink says, "Well, I can clearly see you're nuts."

4. I went to buy some camouflage trousers the other day but I
couldn't find any.

5. I went to the butchers the other day and I bet him 50 quid that he
couldn't reach the meat off the top shelf. He said, "No, the steaks
are too high."

6. My friend drowned in a bowl of muesli. A strong currant pulled him
in.

7. A man came round in hospital after a serious accident. He shouted,
"Doctor, doctor, I can't feel my legs!" The doctor replied "I know you
can't, I've cut your arms off".

8. I went to a seafood disco last week...and pulled a muscle.

9. Two Eskimos sitting in a kayak were chilly. They lit a fire in the
craft, it sank, proving once and for all that you can't have your
kayak and heat it too.

10. Our ice cream man was found lying on the floor of his van covered
with hundreds and thousands. Police say that he topped himself.

11. Man goes to the doctor, with a strawberry growing out of his
head. Doc says "I'll give you some cream to put on it."

12. 'Doc I can't stop singing The Green, Green Grass of Home'. "That
sounds like Tom Jones syndrome." 'Is it common?' "It's not unusual."

13. A man takes his Rottweiler to the vet. "My dog is cross-eyed, is
there anything you can do for him?" "Well," said the vet, "let's have
a look at him". So he picks the dog up and examines his eyes, then he
checks his teeth. Finally, the vet says, "I'm going to have to put
him down." "What? Because he's cross-eyed?"
"No, because he's really heavy".

18. Apparently, 1 in 5 people in the world are Chinese. There are 5
people in my family, so it must be one of them. It's either my mum or
my Dad, or my older Brother Colin, or my younger Brother Ho-Cha-Chu?
But I think its Colin.

20. Police arrested two kids yesterday; one was drinking battery
acid, and the other was eating fireworks. They charged one and let
the other one off.

21. "You know, somebody actually complimented me on my driving
today." They left a little note on the windscreen. It said, 'Parking
Fine.' "So that was nice of them."

22. A man walked into the doctors, he said, "I've hurt my arm in
several places". The doctor said, "Well don't go there anymore".
"Doctor, doctor when I bend my arm like this it hurts." "Well don't
do it!"

23. Ireland's worst air disaster occurred early this morning when a
small two-seater Cessna plane crashed into a cemetery. Irish search
and rescue workers have recovered 1826 bodies so far and expect that
number to climb as digging continues into the night.
Published by The Other Boy at around 10:52 AM 2 comments:

Places of people who have viewed my blog (Clustrmaps)

PEOPLE WHO KIND OF, BUT NOT REALLY, LIKE ME

THIS SECTION IS ABOUT ME,

The Other Boy
I am not too interesting. I am not very important. I am not much of a conversationalist. You will be more likely to talk to and make friends with someone else. This is why I am the 'Other Boy'. I am of slightly above average intelligence, and I do not like to admit it or accept praise for it, but I have it none the less.

All of my posts